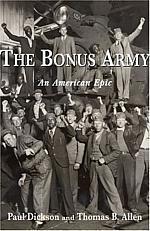 The Bonus Army: An American Epic
by Paul Dickson and Thomas B. Allen

The sweeping story of the veterans’ protest that changed the course of American history. Veterans have vexed politicians since the days of Caesar’s legions.

Even the American Revolution ended with a disgruntled army menacing Congress. But no veterans story has been as dramatic or eventful as that of the Bonus Army.

During the summer of 1932, in the depths of the Depression, some 45,000 veterans of World War I descended on Washington, D.C. to demand of Congress immediate payment of a cash bonus promised them eight years earlier for their wartime service. They lived in shantytowns, white and black together, and for two months they protested peacefully for their cause—an action that would set off a chain of events and have a profound effect on American history.

President Herbert Hoover, Army Chief of Staff Douglas MacArthur, and others feared the veterans were controlled by Communists plotting revolution, and would turn violent after the Senate defeated the “bonus bill” passed by the House. On July 28, 1932, going beyond presidential orders MacArthur drove out the veterans with tanks, tear gas, and soldiers wielding bayonet-tipped rifles. Newspapers and newsreels showed graphic images of American soldiers attacking their former comrades in arms.

Upon reading newspaper accounts of the eviction, Democratic candidate Franklin D. Roosevelt, in a critical contest with Hoover for the presidency, said to an advisor, “This will elect me.”

But Roosevelt was as reluctant to pay the bonus as Hoover, and bonus armies returned in the first three years of his administration. Seeking a solution, FDR drafted veterans into the Civilian Conservation Corps, sending many to Florida; there, on Labor Day, 1935, the worst hurricane ever to strike the United States killed some 250 of them, prompting Ernest Hemingway to champion their cause against a government cover-up.

"The Bonus Army" tells the full and dramatic story of the Bonus Army, and of the many celebrated and unlikely figures involved: MacArthur and his aide, Dwight Eisenhower, Walter Waters, who inspired the first 150 bonus marchers in Portland, Oregon; Evalyn Walsh McLean, owner of the Hope Diamond, who sided with the marchers against the Washington establishment; Roy Wilkins, then a young reporter, who saw the model for racial integration there; J. Edgar Hoover, who built his reputation against the bonus army radicals. Dickson and Allen also recover the voices of ordinary people who dared tilt at powerful injustice, and who ultimately transformed the nation.

The bonus was finally paid in 1936. But the marchers’ crowning achievement came eight years later Congress, knowing now the power of veterans demanding their rights, passed the G. I. Bill of Rights, one of the most important pieces of social legislation in U. S. history, which in large part created America’s middle class.